Some people prefer FTP, but other people want to use webDAV instead.  Both FTP and webDAV work well in regarding to allowing users to transfer files from one computer to another.  With webDAV, you can actually map a network drive and allow multiple users to use the same webDAV network drive.  I’d written on how to set up webDAV in Ubuntu (a Linux distribution) before, and so this time around I’ll show you how to set up webDAV on Windows. 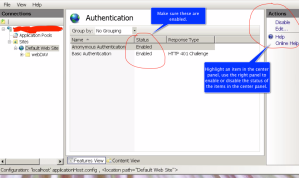 Let us begin (wait, make sure you check the images above to correlate with certain parts of the tutorial below):

Let us map a network drive to our webDAV folder:

Some how, it’s difficult for Windows 7 Home Premium to connect to webDAV server of any environment (i.e., hosting by Windows or Linux machine).  The best way to go around this is to use BitKinex which can be downloaded on download.cnet.com. In conclusion, broadband and cable companies such as AT&T are doing a great job in protecting their customers by providing free security software.  The Internet is somewhat less hazardous to huge pools of people who can download and install free security products from their ISPs.  So, don’t you go out and waste money on a standalone security product before you ask your ISP for a similar product first, OK?  Good luck!