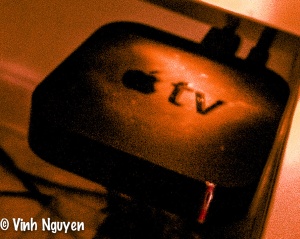 In case you don’t know, the latest Apple TV’s Airplay feature doesn’t work with some Apple devices.  Correct me if I’m completely wrong, I think MacBook Pro and Air laptops that debuted before 2011 cannot use Airplay.  Can’t talk about Mac Pro, because I don’t have one.  Furthermore, Airplay isn’t compatible with iPad 1 and iPhone versions that came out before iPhone 4.  Specifically, I had said Airplay would not be compatible with MacBook Pro and Air that debuted before 2011, but I’ve found out that Airplay can be used with iTunes regardless how Airplay isn’t compatible with Mac laptops that came out before 2011.  There is a catch though, Airplay can only work with iTunes on older Mac laptops if you’re running the latest Mac OS X Mountain Lion operating system.

I had to scratch my head when I played around with Apple TV, because I couldn’t fathom Apple’s refusal in making Airplay to work with older MacBook whatever (i.e., the ones that came out before 2011).  With older MacBook whatever, it would be that you lied if you told me about how you could find the Airplay icon on the menu bar.  Anyhow, my curiosity caught fire when I had iTunes on mid 2010 MacBook Pro used Airplay to stream videos onto Apple TV.  So, I was rather frustrated to see that Apple allowed iTunes on older hardware to use Airplay as long the older hardware could run the latest Mac OS X Mountain Lion operating system and yet refused to let anything else to work with Airplay.

Luckily, I got iPad 2, and it worked just fine with Airplay.  So, if you have iPad 1, you would be out of luck!  As I explored Apple TV a little more, I found out that iPhone 4 would work with Airplay just fine too.  I concluded that Airplay made Apple TV.  Sure, Apple TV did have other features such as Home Sharing, but these other features could be found on any Mac.  Home Sharing required iTunes to stream from Mac to Apple TV, and so Apple users would be limited to iTunes content only.  Airplay changed the game as users could just either mirroring or stream 1080p resolution videos from Apple devices to Apple TV, consequently pretty pictures would fly on whatever big screen TV.

To tell the truth, if your big screen TV can be just as smart as a computer, you probably have no need for Apple TV unless you’ve really wanted to stream some videos from iPad 2 or so.  For me personally, Apple TV has saved my dumb TV as it got no brainiac features as other smart big screen TVs.  Nonetheless, I don’t care how smart my TV can get if I can’t use Airplay, therefore I have to say Airplay is the only feature I like most on Apple TV.  Oh, I forgot to tell you that you can definitely play video games on a dumb big screen TV through Apple TV’s Airplay.  Cool?

Here is my honest assessment of my iPad usage since the day I bought it.  I have an iPad 2 from very early on, but I rarely use it!  How come?  Before I start to rant on, let me get something straight first!  I don’t plan to buy iPad 3 or however Apple calls it (the new iPad, I believe), because I rarely use iPad 2.  So, how come, right?  Well, iPad is a very good device and I’m loving it, but it’s just so limited for me.  Check out the points below that shine some light on why iPad 2 is so limited for me.

In the end, I think my iPad 2 is only a good backup for my iPhone 4.  That’s, when iPhone 4 runs out of battery and needs to be recharged.  That’s, when iPhone 4 needs to be replaced by another smartphone or iPhone newer generation model/device.  That’s, when iPhone 4 has issued with a particular on the go app (but this is most unlikely for me).  So, my honest opinion on iPad 2 or any iPad in general is that I don’t really care to have iPad, because it seems to me the device is just another netbook but with just some more advantages (i.e., not a whole lot more advantages I mean) in fashion, trend, and portability.  I’m not even close to 40s, and yet I feel I’m too old for the people who think iPad is the only thing they ever need!  I do feel smartphone has become evermore useful in terms of portability and usability, but I can’t say so for iPad!  Let me end this blog post with this, “I love my iPad very much, but I can’t just be so close to it even though I really want to!”  Kinky? iPad 2 which uses iOS 5 has a major security flaw in regarding to the use of Smart Cover.  Smart Cover is able to unlock the password protected lock screen to reveal only the recent opened application.  Fortunately, this flaw won’t allow the exploration of everything else there is on iPad 2, because the password protected lock screen returns after someone exits the recent opened application.  If this is unclear, you can check out the video right after the break to get a better understanding of iPad 2’s Smart Cover iOS 5 security flaw.

Want to know how to repeat the Smart Cover iOS 5 security flaw on iPad 2?  Here is how:

Why you want to use an iPad as a laptop is beyond me, because iPad isn’t meant to be a laptop or replacing a laptop.  Although it will be nice if iPad can replace a laptop without sacrificing laptop’s feels and features.  After all, iPad is way more portable than laptop in terms of weight and size.

For the people who want to turn their iPad 2s into laptops, they now can be happy that Belkin has released iPad 2 cases that come with keyboards to allow users to have the feeling of using real laptops.  From the video below, a representative for Belkin describes that Belkin’s Keyboard Folio for iPad 2 has a solid keyboard feel than most keyboards for iPad 2 in the market as we speak.