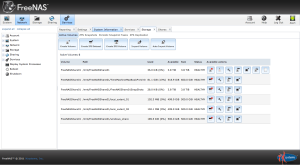 As I’m getting to know FreeNAS better, I begin to like it more than ever before.  FreeNAS has allowed me to set up CIFS share (Common Internet File System share) so I don’t have to rely on Pogoplug software to share data between my local computers.  Why is FreeNAS’s CIFS share is better than Pogoplug solution?  Well, I like how my data don’t have to travel through Pogoplug’s servers that host outside of my local network in order for me to be able to share data between my local computers.  With this piece of information, we can acknowledge that data travel locally are always faster (i.e., not making a trip to the Internet first and so save time and bandwidth) and more secure if the local network is being secured correctly.  Of course, I’m still going to use Pogoplug when I travel abroad, because Pogoplug is great in allowing you to connect to local computers without opening up any port within your router (this means you don’t have to sacrifice your network security when sharing files between local network and the Internet).  Still, you must trust Pogoplug’s network security in order for you to access your local computer through Pogoplug software, because ultimately your data will travel through Pogoplug’s network before they reach the devices that you use outside of your local network.

Steps to create CIFS Share in FreeNAS (the instructions at the bottom are tailored for FreeNAS 8).

Using a Windows computer to connect to FreeNAS Windows Share is easy!  All you have to do is to go to Computer > Network.  Once the Network locates FreeNAS Windows Share volume (i.e., ZFS Dataset of CIFS Share), you can browse to it and use it as if it’s just another network folder — allowing local computers to share the same data (i.e., read and write to the same data).

You can also use Mac machine to connect to FreeNAS Windows Share!  How?  Open up finder and go to Go > Connect to Server.  Inside Connect to Server box, enter cifs://192.168.0.101/ (please replace the local IP address to the one that runs your FreeNAS server).  Click Connect button to connect to FreeNAS windows share.  If it asks for user credential (i.e., username and password), please enter the username and the password that you allow to have access to this particular FreeNAS Windows Share (i.e., ZFS Dataset of CIFS share).  Once you can browse the FreeNAS Windows Share, you can read and write data to this ZFS Dataset, consequently allowing Windows computers to share data with Mac machines within a local network.

I’ve not used Linux to access FreeNAS Windows Share, therefore I don’t know the exact process of how doing it just yet.  You know?  Please share your knowledge on this in your comment.  Thank you!